Further to the F-gas stakeholder workshop that took place early May, AREA has submitted comments both individually and as part of a large industry coalition.

AREA joined 14 other European and national trade associations representing a large spectrum of the refrigeration, air conditioning and heat pump industry. Together, the industries flagged insufficient technical justifications in support of the policy options currently evaluated as part of the impact assessment in preparation for the upcoming revision of the F-gas Regulation.

In a joint statement, the co-signatories noted in particular:

In an individual submission, AREA provided further explanations and justifications on the costs of extending the F-gas certification scheme to alternative refrigerants and stressed the importance of maintaining refrigerant's choice in support of energy efficiency.

Both sets of comments can be downloaded below. 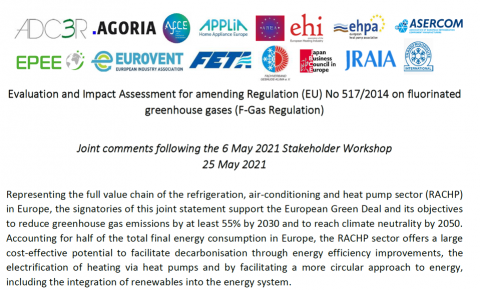