A staggering 43 delegates representing 23 (out of 25) member associations, 2 international partners from Thailand and India and 2 guest associations from Switzerland and Africa took part in the autumn meeting of the AREA General Assembly. The meeting was held by video conference. Four longstanding prominent figures left the Board: former Presidents Graeme Fox (BESA, UK), Gerhard Neuhauser (OEKKV, Austria) and Per Jonasson (SKVP, Sweden), as well as Stig Rath (VKE, Norway). Members paid tribute to their outstanding contribution and commitment to the management of the organisation.

Marco Buoni was elected for a second term as President, alongside Grzegorz Michalski (KFCh, Poland), who remains Director. They were joined by four new faces: Coen van der Sande (NVKL, Netherlands) re-joined the Board as Vice-President – a position he held two years ago. Seamus Kerr (IRI, Ireland) was elected Treasurer, whilst Thanos Biris (HUFGAS, Greece) and Mika Kapanen (FREA, Finland) joined as Directors.

AREA President Marco Buoni said: “I salute the leaving board with admiration for the great work we have achieved together such as the AREA Vision 2025, COVID-19 guides, real alternatives training and certification and international cooperation. I am looking forward to reach even greater goals with the new board who has enthusiastically accepted the mandate and the next challenges. At the top of the agenda now is the European Green Deal, the F-Gas regulation review, mandatory certification for alternative refrigerants and the upcoming conservation and distribution of refrigerated vaccines against COVID-19.” 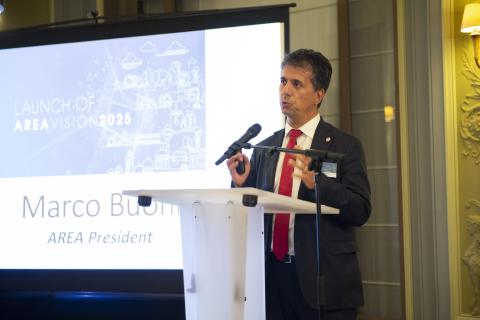